If you’re an ardent user of Facebook Adsthere must have been a few instances where your advertisement images got disapproved. The reason? The text exceeds the required limit. However, recently, Facebook has abandoned the long-standing 20% text rule on Ad images. Recently, the Facebook Advertisers began noticing a change – their ad images were no longer being dismissed due to too much text.

As Facebook has not released the news formally yet, a few sources confirm uplifting of the 20% text rule. This comes as a significant scoop of news for advertisers as the scrapping of the 20% rule saves them for any last-minute text modification. Furthermore, it gives the creative freedom to play around with ad copy without being wary of violating the rule.

Although there is no formal statement from Facebook yet, the About text in Ad images page has undergone a slight update. In fact, several media buyers began receiving direct communication from Facebook pertaining to the change. Social Media Industry thought leader, Matt Navarra  tweets Facebook’s message regarding the new change as shown in the image below. 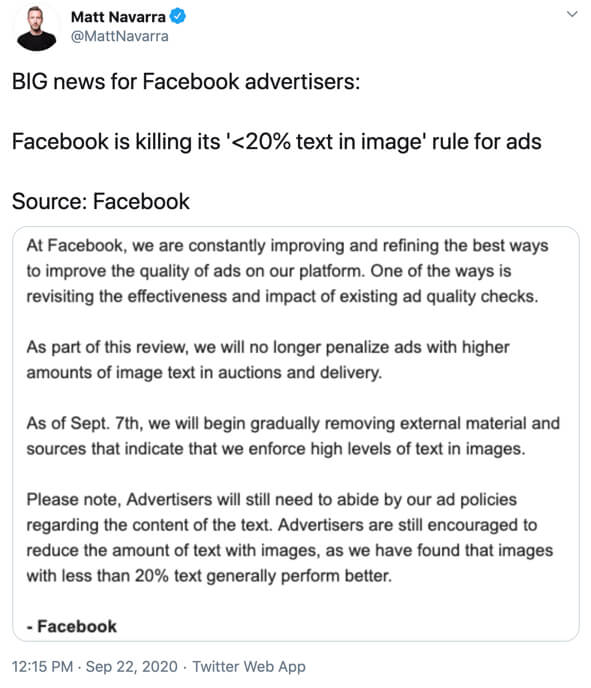 Prior to the multiple media options and ad units that Facebook offers now, the adverts were all about the text and image combo. Hence, too much text on those old-style ads looked noisy in the newsfeed. Thus, the purpose of the 20% text rule was to reduce any unnecessary noise in the feed. The rule was in place to enhance the user experience as Facebook has always preferred adverts with less text.

The image text in adverts is any text that is there on the ad creative or image. It does not include text outside the image, such as the body text.

Earlier, the 20% text rule for adverts was often a source of annoyance for advertisers as well as copywriters. And as Facebook discards the rule, it has sent a sigh of relief to them. Now, the advertisers can be more creative in their copies without their ads not performing well due to text limits. Having said that, the social networking and advertising platform still recommends using text in the 20% ratio.

So, before you rush about loading your adverts with a lot of text, keep these it in mind:
Ad copies that are clear, crisp and to the point convert better.

Facebook Ads have grown meteorically in the last few years. The reason is – people turning to social media trends to make purchasing decisions. So, if you need help managing your advertising or looking for complete Social media Marketing for your businessget started with Free Consultation from our Social Media Experts.

We also offer complete Paid Advertising Management services and have had many successful ad campaigns executed for all types of businesses (brick & mortar as well as online). We even have some holiday season offers on paid ads services. Check it out now: